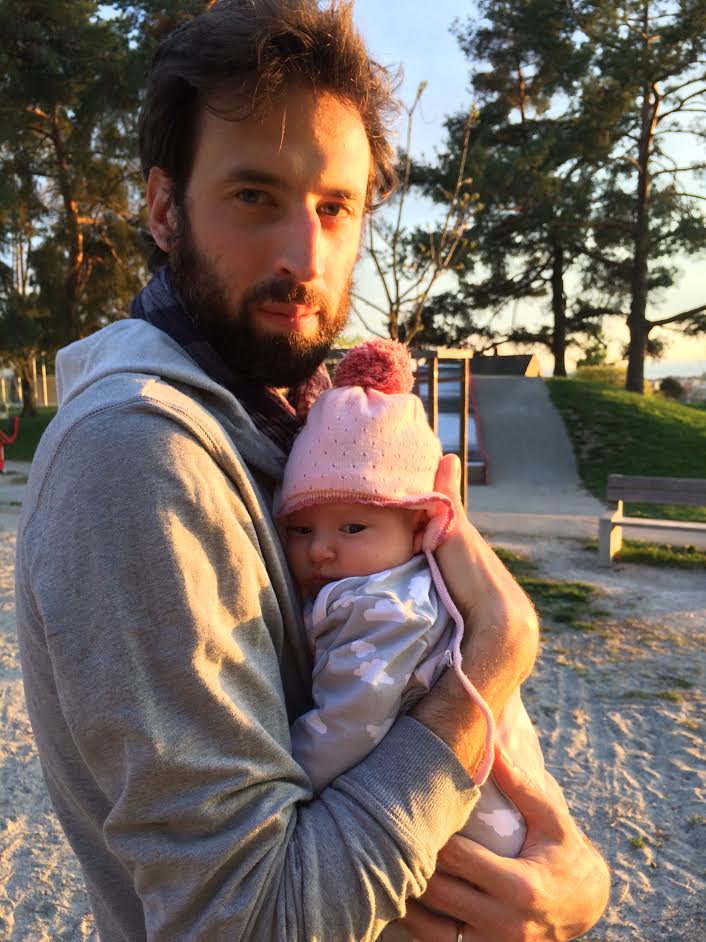 In this April’s Editor’s pick, pieces from previous Highlights features are coming together. About a year ago Dr. Davide Piccini foreshadowed their collaborative study with NYU to incorporate XD-GRASP into their work on free-breathing motion correction. Seems like it was a productive year for Davide, as he not only delivered on his research promise, but also became a father. The Highlights team extends their sincerest congratulations to the Piccini family! We spoke to Davide and senior author, Prof. Matthias Stuber from the University of Lausanne, about their recent paper on Four Dimensional Respiratory Motion-Resolved Coronary MR Angiography.

Agâh: Davide, we heard how you got into MRI last time we spoke. Perhaps you can now tell us how fatherhood is treating you?

Davide: At the moment, the lack of sleep does not help the scientific output (laughs). Fortunately I got a couple of weeks of paternity leave, and I extended that and took a personal vacation to spend time with my daughter. I have also been working on a fetal cardiac imaging project recently, and seeing echoes of my own daughter provided additional motivation for that project.

Agâh: Matthias, how did you get into MRI research?

Matthias: I studied electrical engineering at ETH in Zurich. I am lucky ETH had an Institute of Biomedical Engineering, where I took some classes and fell in love with MRI. So I really wanted do a PhD in this field and kept nagging Prof. Peter Bösiger. I was a pest, so he thought it would be easier if he hired me, which he did. Little did I know that it would lead me to a fulfilling professional carrier, where I got to work with leading research labs and companies. It has been a great, great ride!

Agâh: We are curious to know the story behind this fruitful collaboration with NYU. How did it start?

Davide: It was very informal in the beginning. I met Li Feng at SCMR in 2014, where he gave a talk on XD-GRASP. As soon as I saw it, I said this could be done right away for 3D exploiting the golden angle arrangement of our radial phyllotaxis trajectory! I approached him afterwards, and asked if I could send him a couple of datasets. He agreed, and the first results were very good. Then we kept talking at subsequent conferences, we became friends, then I met Ricardo Otazo and Daniel Sodickson and we took it from there.

Matthias: It helped that I was working with Dan Sodickson in the same office back in my days at Harvard. I have known Dan since 1997, so this connection was very easily made and become successful quickly. Then, there was another critical component. We hired Jérôme Yerly in our lab, who brought with him a lot of knowledge about compressed sensing. He implemented our own compressed sensing engine here in Lausanne, which we are now using every day.

Agâh: Can you give a brief summary of your paper?

Davide: This paper describes how you can acquire a 3D volume over time using a segmented 3D phyllotaxis (golden angle) radial acquisition, which covers the entire k-space uniformly and induce very low amounts of eddy currents. Thanks to golden angle displacement of this trajectory the sampled segments allow for pseudo-uniform coverage of k-space even when re-ordered retrospectively, while reconstruction artifacts remain not coherent. Looking at the center of k-space for certain projections, we extracted a respiratory signal with which we can bin the 3D radial data in as many respiratory bins as we want. From our experience 4 bins are enough for regular breathing. Then we end up with a respiratory state for which we have one quarter of the data that we actually need, so we use the XD-GRASP implementation to increase the image quality. We have several 3D volumes of different respiratory states. Each respiratory state differs from the next in small details. This can be used for the regularization process of the compressed sensing algorithm.

Agâh: Why is XD-GRASP a good fit for coronary MRA?

Davide: The whole concept behind XD-GRASP, resolving the motion instead of correcting for it, is a really good fit because it takes away the burden of trying to tweak your acquisition or your reconstruction to the specific problem. Coronary MRA has always been dealing with finding the best period of stillness, or trying to acquire more data and take care of the correction later by approximating to a motion model. However, each subject is different, so this concept of resolving the respiratory motion takes away the burden of figuring out what the motion is in the first place.

Matthias: The concept of the golden angle enables us to pull out any combination of profiles to generate discrete motion states in the respiratory dimension, and XD-GRASP produces beautiful motion-resolved reconstructed images. I have squandered my youth trying to improve motion correction for cardiac MRI. And some 20 years later, this beautiful technique comes along. I think we enter a new era here. There are many more things that we will be able to do with the exact same technology in the future.

Agâh: Such an ease of use! Can we consider this technique as a sigh of relief for coronary MRA?

Davide: The concept of enabling continuous data acquisition is possibly a sigh of relief not only for coronary MRI, but also for many other applications. Compared to acquisitions that take forever, using patient specific motion models, this is a paradigm shift. Moving forward, we can try to resolve not only respiratory, but also cardiac motion. This is a project that was started by Simone Coppo here in Lausanne, again in collaboration with Li Feng at the NYU.

Matthias: Today, most of the centers use navigators for which multicenter experience exists. However, this is neither the case for self-navigation nor for our new 4D approach. While we are far away from providing a perfect solution just yet, the latter provides both a totally new and exciting paradigm and new research opportunities for young scientists.

Agâh: Are you planning to make this project open source?

Matthias: As a first step, we want to make this open source within our own group. Right now it is in the hands of Jérôme Yerly, but there is so much enthusiasm in the team, everybody wants a piece of it for different projects. Once we have covered our basis and prove the concept, we really plan to push this out to the public domain, where everybody can take advantage of it.