For your convenience, the testing location closest to the ExCeL London Centre is London City Airport.
COVID Testing: http://www.expresstest.co.uk/
Use voucher code ISMRM22 for 4% off the website pricing.

Mask Policy:
Masks are strongly encouraged in all session rooms and any other location within ExCeL London where social distancing is not possible.

Back to Meeting Home

All times are shown in British Summer Time (UTC+1), followed by the equivalent in your time zone.

Jump to a Day:

Registered attendees may access abstracts & syllabi via this page by using the following login:

Username: [Your 5- or 6-digit ID Number]
Password: [Your Last Name]

Passwords are Case-Sensitive and contain no spaces, punctuation or diacritical marks.

Be sure to click the Login button at the top of a session page to be able to view abstracts & syllabi.

Color Key & Filter
Not interested in certain topics? Clicking these boxes will gray-out their header colors below, making it easier to spot your preferred sessions. 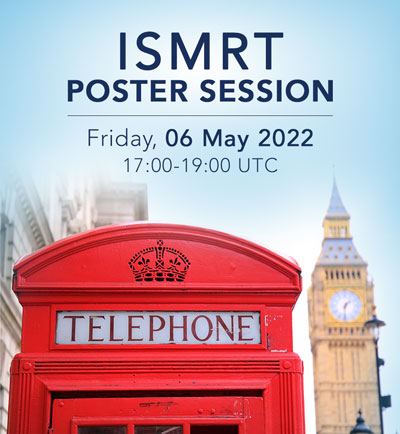 Getting a @Handle on Big Neuroimaging Datasets

Clinical Translation in the Age of AI: Challenges & Successes in Body MRI

Brain Tumors: From Molecules to MRI

The Heart in the Right Place

The Circadian Clock & Its Effect on the Human Brain

Putting Muscle into MRI of Muscle

Spectroscopy: From NMR Tubes to Humans

Build Your Own Open-Source Scanner

EDI Forum:
Axes of Inclusion:
Strategies for Including Magnetic Talent

New Tools for the Neuroradiologist:
4D Flow in the Brain

Hot Topics in Body MRI:
Motility in the Abdomen: Love It or Hate It?

Cardiology Across a Lifespan

Decision-Making: When to Follow Your Heart & Trust Your Guts or Think with Your Head

Flow Head to Toe I

Changing the Beat of Cardiovascular MR

The Technologies That Changed Clinical Cardiovascular MR: A Retrospective

Quantitative Neuroimaging Across the Human Lifespan

Perfusion: From Head to Toe

Physics for Clinicians I

Advances in Data Acquisition I

Data Analysis in the Brain

New Look of Neurofluids Physiology I

Applications of Perfusion Techniques I

Antenatal, Neonatal & Pediatric MRI II: Translation in the Brain & Beyond

Advances in Data Acquisition I

ISMRM-ISMRT Joint Forum:
Reimagining Culture:
Making Our Field Work for the People Who Work in It

From Basic Research to the End User: MR Biomarkers for Muscle & MSK Diseases

New Tools for the Neuroradiologist:
MR Elastography in the Brain

IP & Commercialization: MRI & Patents: Is It All About the Acronym?

CMR Within the Myocardium

Flow from Head to Toe

Advances in Treatment of Body Disorders

Imaging of the Spinal Cord

Cardiovascular MR with a Little Help from AI

Renal MRI: From Nephron to k-Space

Making Best Use of Available Animal Resources in Imaging Research

Rare Disease Management in the Clinic

What Can We Do with an N=1? Individual Prediction Models

New CMR Methods for Anatomy & Function (Micro- to Macro-) I

Velocity-Selective ASL: From Theory to Practice

Neurofluids: From Macro to Micro

Advances in Diagnosis of Neurologic Disorders

Advances in Treatment of Neurologic Disorders

New Tools for the Neuroradiologist:
MR Thermometry 2.0: Temperature as a Biomarker in Neuroscience

Imaging of the Spinal Cord

"Propertography": Contrasts Based on Properties

Managing Motion in the Brain & Body I

Presidential Program:
Historical Project:
Footprints of the ISMRM on the MR Path

The Future of AI in Medical Imaging

In Tribute to Richard Ernst's Legacy: Scientists as “Toolmakers” in NMR & MRI

In Memory of Richard Ernst

Can't Make It Without the Real Tools: The Art of the RF Coils

Tractography Studies in the Brain

Advances in Treatment of Body Disorders

Tractography & Microstructural Studies in the Brain

Advances in Parkinson's Disease Imaging I

No Time to Wait! Increasing the Value of MRI with Zero Echo Time

New Tools for the Neuroradiologist:
Sodium Imaging in the Brain

Hot Topics in Body MRI:
MRI of the Pancreas

IP & Commercialization: What's the Value of a Patent? A Debate & Discussion

Outstanding Abstracts from the Annual Meeting

Epilepsy: From Animal Models to AI

Data Analysis Outside the Head

Resting-State fMRI in Humans in Health

Resting-State fMRI in Humans in Disease

Ideas Ahead of Their Time

Pulmonary: Inhale the Present, Exhale the Past

Microstructure from All Angles: Diffusion & Susceptibility

Due to unforeseen circumstances, these in-person digital poster sessions (17:00-18:00 and 18:00-19:00) have been RESCHEDULED to earlier in the day and have been given new computer numbers. Presenters should immediately check their new presentation time and computer number.

We apologize for any inconvenience this may cause.

Finding Ecstasy & Agony in a Marriage Between Physics & Neuroscience

See you next year in Toronto!

Back to Meeting Home

Back to the Program-at-a-Glance

The International Society for Magnetic Resonance in Medicine is accredited by the Accreditation Council for Continuing Medical Education to provide continuing medical education for physicians.

Evis Sala is the Professor of Oncological Imaging at the University of Cambridge, United Kingdom (UK) and co-leads the Cancer Research UK Cambridge Centre Advanced Cancer Imaging Programme and the Integrated Cancer Medicine Programme. Dr Sala’s research focuses on the development and validation of functional imaging biomarkers to rapidly evaluate treatment response using physiologic and metabolic tumour habitat imaging. Her research in the field of radiogenomics has focused on understanding the molecular basis of cancer by demonstrating the phenotypic patterns which occur as a result of multiple genetic alterations that interact with the tumor microenvironment to drive the disease in several tumor types. Her work integrates quantitative imaging methods for evaluation of spatial and temporal tumor heterogeneity with genomics, proteomics and metabolomics. She is also leading multiple research projects focusing on the development and implementation of artificial intelligence methods for image reconstruction, segmentation, and data integration. Dr Sala is an outstanding educator, orator and mentor. In recognition for her contribution to education and research in oncological imaging she received the Radiology Society of North America (RSNA) Honored Educator Award in 2014, 2017 and 2020. Her leadership extends to the most important international bodies in the field. She is a Fellow of the International Cancer Imaging Society, Fellow of the International Society for Magnetic Resonance in Medicine, Fellow of the European Society of Urogenital Radiology and Fellow of the Royal College of Physicians, United Kingdom.

Dr. Shanshan Wang is a professor at the Paul C Lauterbur Research Center, Chinese Academy of Sciences, where she and her group target to develop novel adaptive learning methods and applications for fast medical imaging and intelligent medical analysis. With dual Ph.D. degrees in Biomedical Engineering (BME) and Computer Science (CS), she pioneered the integration of core CS methodologies with imaging sciences. Her innovative approaches led to several key contributions to the field of medical imaging: (1) widely recognized as a pioneer for introducing deep learning to magnetic resonance (MR) imaging, which opens up a new era of learning reconstruction for MRI and enabled “real-time” observation of numerous challenging biological structures and processes; (2) designed unrolled iterative feature refinement framework, which could achieve sub-millimeter high-resolution MR imaging. This work was selected as “Research highlight” by “Physics in Medicine and Biology”; (3) developed a series of stat-of-the-art algorithms that can discover disease characteristics that were previously not detectable by the naked eye and release clinicians from repetitive and tedious work leading to full automation; (4) designed a universal open framework AIDE (published in Nature communication, 2021) for automatic medical image segmentation, which can handle imperfect clinical datasets having limited annotations, lacking target domain annotations, or containing noisy annotations. AIDE can utilize expert labels with 10-fold enhanced efficiency and has the potential to promote a wide range of biomedical applications.

The Future of AI in Medical Imaging

He received the Electrical Engineer Diploma from ESIEE, Paris (1983), and a PhD in CS from Sorbonne Université (1987). After a postdoc at the University of Toronto, he joined AT&T Bell Laboratories (Holmdel, NJ) in 1988, later becoming the head of the Image Processing Research Department at AT&T Labs-Research in 1996. He joined NYU as a professor in 2003, following a brief period at the NEC Research Institute (Princeton). In 2012. He became the founding director of the NYU Center for Data Science. In late 2013, he was named Director of AI Research at Facebook, remaining on the NYU faculty part-time. He held a visiting professor chair at Collège de France in 2015-2016.

His current interests include AI, machine learning, computer perception, robotics, and computational neuroscience. He is best known for his contributions to deep learning and neural networks, particularly the convolutional network model which is very widely used in computer vision and speech recognition applications. He has published over 190 papers on these topics as well as on handwriting recognition, image compression, and dedicated hardware for AI.

LeCun is founder and general co-chair of ICLR and has served on several editorial boards and conference organizing committees. He is co-chair of the program Learning in Machines and Brains of the Canadian Institute for Advanced Research. He has been on the science advisory board of IPAM (since 2008) and the board of trustees of ICERM . He has advised many companies and co-founded startups Elements Inc. and Museami. He is in the New Jersey Inventor Hall of Fame. He is a member of the US National Academy of Sciences, the National Academy of Engineering, a Chevalier de la Légion d’Honneur, a fellow of AAAI, the recipient of the 2014 IEEE Neural Network Pioneer Award, the 2015 IEEE PAMI Distinguished Researcher Award, the 2016 Lovie Lifetime Achievement Award, the 2018 University of Pennsylvania Pender Award, and honorary doctorates from IPN, Mexico and EPFL.

He is the recipient of the 2018 ACM Turing Award (with Geoffrey Hinton and Yoshua Bengio) for "conceptual and engineering breakthroughs that have made deep neural networks a a critical component of computing.

Finding Ecstasy & Agony in a Marriage Between Physics & Neuroscience

Kamil Ugurbil currently holds the McKnight Presidential Endowed Chair Professorship and is the Director of the Center for Magnetic Resonance Research (CMRR) at the University of Minnesota. After completing his B.A. and Ph.D. degrees in physics, and chemical physics, respectively, at Columbia University New York, N.Y., Prof. Ugurbil joined AT&T Bell Laboratories in 1977, and subsequently returned to Columbia as a faculty member in 1979. He was recruited to the University of Minnesota in 1982 where his research in magnetic resonance led to the evolution of his laboratory into an interdepartmental and interdisciplinary research center, the CMRR. His primary research focus has been the development and application of MR methods and instrumentation towards obtaining ultrahigh resolution and high accuracy functional and anatomical information in the human brain. This body of work has culminated in pioneering accomplishments, such as the co-introduction of fMRI, the introduction and development of ultrahigh magnetic fields (7 Tesla and higher), functional mapping of columnar and layer specific functional responses in the human brain, and highly accelerated functional brain imaging. He was one of the two PI’s of the Human Connectome Project and one of the fourteen members of the first BRAIN Initiative working group. He was recognized by several awards and honors including membership in the National Academy of Medicine, ISMRM Gold Medal, Richard Ernst prize, ISMAR prize, and the IEEE Medal for Innovations in Healthcare Technology.

Your password for this meeting site is simply your last name, but with some possible adjustments. It is Case-Sensitive and any spaces, punctuation, and diacritical marks are removed.

All of the times below are shown in British Summer Time (UTC+1), followed by the equivalent time in your local time zone. This conversion is done in-browser and no location information is sent to ISMRM.

If the you see "Invalid date" or no dates/times at all, your browser may be blocking the javascript used to make the time conversion. If you are using script blockers, please whitelist this page or use a different browser.

The ISMRM is excited to offer the Clinical Focus Meeting: Cardiovascular MRI, a 3-day meeting-within-a-meeting on CMR during the joint ISMRM-ESMRMB in London, designed for clinicians and scientists with an interest in MRI of the cardiovascular system. Present your research in CMR to the wider ISMRM-ESMRMB community or come and learn about basic applications, cutting-edge developments, and clinical translation of Cardiovascular MRI from renowned experts from all over the world!